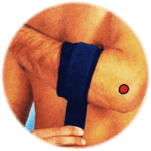 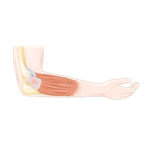 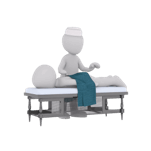 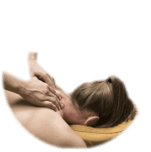 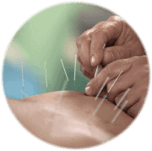 A tennis elbow is usually caused by overloading the wrist extensor muscles. This overload manifests itself by a painful attachment of one or more tendons to the elbow and adhesions in the muscles involved. Small tears arise in the tendons around the elbow. The overload can occur when a person keeps repeating the same movements (computer work) or when there is a sudden heavy load onto the muscles (for example, playing tennis without proper warming-up or due to injury).

Anyone who has a tennis elbow, probably has pain at the outside of the elbow, particularly when extending the elbow or bending the wrist. This pain may radiate to the forearm, wrist and hand and sometimes also to the upper arm and shoulder. Furthermore, it may be that a person has less strength in the arm.

A known test that the general practitioner can do, in order to make the diagnosis of tennis elbow, is pressing with one hand on the attachment of the tendon at the elbow and then ask to move the hand towards the back of the hand. When this hurts a lot, it’s often a confirmation of the diagnosis.

A tennis elbow can pass on its own when there is no overload anymore, but it may take a long time. It's often advised to put ice onto the elbow. The doctor can also prescribe anti-inflammatories in order to reduce the inflammation in the elbow. Probably, the patient is also referred to a physical therapist, who will try to treat tennis elbow using massages, exercises and mobilization. The patient can also wear a brace or splint around the elbow to reduce the symptoms of tennis elbow, but it’s generally recommended to keep the elbow moving.
There are also other treatment options, but the effectiveness of these may vary. For example:

When giving rest to the arm and avoiding activities that cause the symptoms, there are good chances that the tennis elbow decreases with time. Pain of tennis elbow usually lasts six to twelve weeks, because tendons heal slowly. But in some people, the pain can last longer (between six months and two years). In practice, a tennis elbow can actually always heal spontaneously, but treatment methods can provide faster improvement of symptoms. Once a person has had a tennis elbow, it may come back again.