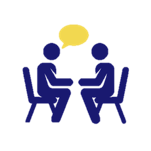 Stuttering is a speech disorder, in which the smooth operation of speech movement is disturbed. Sounds or syllables are repeated or extended. Sometimes they are pressed out with a lot of tension. These symptoms are prolonged (at least three months) or frequently present and so serious that it can significantly disturb communication.

In case of stuttering, there is something wrong in the communication between the brains and all muscles that are needed to talk. A muscle responds too early or too late, creating a kind of malfunction. By repeating letters several times or holding a letter for a long time, the malfunction is resolved and the person can continue talking again.
Many patients don’t stutter when they sing or, for example, talk to their pet. This is because the voice is used in a different way then, or because there is no tension. For the cat, it doesn’t matter whether a person stutters or not, while one may be afraid that another person will respond annoying. So often there’s an emotional or psychological element behind stuttering.
If one or both parents stutter or have ever been stuttering, there is a higher risk that the child will stutter as well. Nowadays, a few genes are known that may cause stuttering. In those cases, stuttering is hereditary, but this is not always the case. Stuttering sometimes occurs, because children imitate their parents.
Very occasionally it happens that an adult suddenly starts stuttering. This is often due to an intense or emotional event. Stuttering is mainly a psychological problem then.

Every person is different and so is every stutterer. Each person stutters in his or her own way and has his or her own letters or sounds that are difficult for him or her. Roughly speaking, there are three forms of stuttering:

Some stutterers make movements with, for example, their arms or their heads at the moment they stutter. Also common is that the stutterer tries to avoid stuttering. For example, a person chooses another word, in which the annoying sound is not present or one doesn’t talk at all. Sometimes, stutterers also shy away from situations with a high probability of more stuttering, such as speaking to a group of people.

A speech therapist or stuttering therapist can determine whether there is stuttering. This is done by means of a conversation, video recordings, voice analyses and questionnaires to parents and child.

In four out of five cases, stuttering passes on its own in toddlers. Yet it’s important to intervene in time. The sooner therapy is started, the more likely it is that stuttering can be overcome. Stuttering is treated by speech therapy or stuttering therapy. A speech therapist or stuttering therapist will first playfully watch how the child speaks and develop a treatment plan on the basis thereof.
In young people or adults, speech therapy may well help to deal with stuttering. There are also support groups, where stutterers can join together and help each other how to deal with the condition. When stuttering later in life has been caused by a traumatic event, mainly psychological help is offered to process the event. Stuttering usually passes after processing.

Among preschoolers, the prognosis with respect to healing is good. Children overcome stuttering in many cases. Especially girls show good results. For other children, the treatment should be effective to speak fluently again.
For adult stutterers, there is no cure, even if they can get a partial recovery of fluently talking by a number of therapies. Some stutterers often learn to stutter less and are emotionally less affected by the condition, while others show no improvement after therapy.