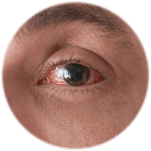 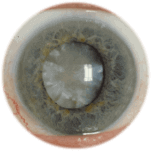 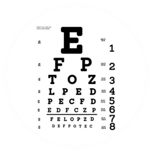 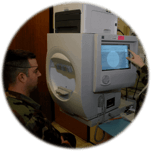 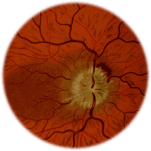 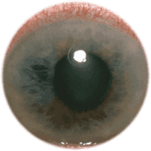 Retinal detachment is a condition, in which the retina is partly released from its underlying layers and can no longer function at that location. Usually, people with retinal detachment suddenly see dark floating particles and flashes of light. It is a serious condition that leads to blindness when it is not treated.

The entire space in the eye between the lens and the retina is filled with vitreous. Aging changes the composition of the vitreous. The vitreous shrinks slightly and gradually pulls back from the retina. This is a normal aging process. At a given moment, the vitreous lets go of the retina. As a result, cracks in the retina and bleeding in the eye can occur. Due to such a crack, moisture can get under the retina, causing the retina to be released. This is called retinal detachment. Apart from age, there are other factors that increase the risk of retinal detachment:

Retinal detachment is determined by the ophthalmologist after performing the following examinations:

There are several methods to treat retinal detachment:

About ninety percent of the operations succeed in getting the retina back into position and keeping it that way. Sometimes, multiple operations are required. Successful intervention usually restores the field of vision (the environment). Recovery of visual acuity is dependent on several factors. The most important factor is whether the retinal detachment has reached the center of the retina (the macula). If this is the case, recovery will be incomplete.

It is possible that before and/or after retina surgery, posture advice is given by the retina surgeon. How often and how long a posture must be assumed, depends on the retinal condition and retinal surgery.
Tips to spare the eyes: