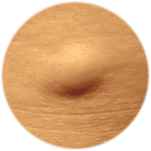 A lipoma is a soft, fatty lump, a benign tumor of adipose tissue cells. It has the shape of a round oval bump under the skin. The condition is very common and is basically harmless. Sometimes, it looks ugly. Depending on the location and size of the lipoma, it may hinder daily activities and cause pain.

The cause of lipomas is unfortunately not known. One person gets them and the other doesn’t. Heredity plays a role. When a lipoma has ever been detected, the probability is slightly higher than average that someone gets them again elsewhere on the body. Then a person is susceptible to this condition.
When searching hard enough, one or more lipomas can be found on almost everyone. When there are many lipomas (lipomatosis) and if they are painful, then we speak of Dercum’s disease.

A lipoma grows slowly. If the swelling grows very rapidly, it’s probably not a lipoma. They feel elastic and stretchable and can be moved well in relation to the underlying tissue. There are also stalked lipomas. In size, they can vary from a few millimeters to some centimeters.
Lipomas can emerge anywhere on the body where fat cells are, but they are especially common on the forearms, neck, back, shoulder, upper legs and torso. Usually, a lipoma causes no problems, but sometimes it can be painful when it’s located against a nerve.

The diagnosis of lipoma can usually be made on the basis of its appearance. By looking well and feeling the skin (palpation), the doctor will often be able to determine that it’s a lipoma. If the lipoma is located on a difficult place or is very large, additional ultrasound may be carried out.

Often, no treatment is required for a lipoma. The lipoma is surgically removed only when it is inconvenient, painful and/or ugly. It may also be that the lipoma is suspected of being malignant. The latter actually doesn’t occur, although many people are concerned with discovering a lipoma. In case of malignancy, we speak of a liposarcoma. Except when the lipoma is large or on a technically difficult place, the removal can be done by the general practitioner under local anesthesia. The doctor sometimes sends the tissue to a laboratory for examination.

Removal of lipomas is generally a good remedy. Sometimes there is risk of recurrence after the operation.