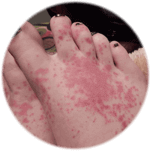 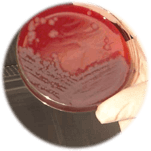 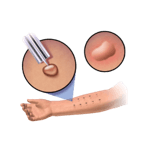 Hives is an itchy skin rash with pale pink, slightly swollen spots. The rash looks a lot like the bumps that people get after touching nettles. The allergic reaction arises suddenly and subsides usually within hours or days. Hives is a common and usually only temporarily active skin condition.

Hives is the result of an allergic reaction. That is to say, that a person is hypersensitive to something. The exact cause often remains unclear. Now and then, it’s obvious which stimulus has caused the hives. Examples of stimuli include:

When a person comes into contact with the stimulus, the skin releases a substance that causes the rash. This substance is called histamine. Psychological factors, such as rush and excitement, may also play a role.

The signs and symptoms caused by hives are:

The allergic rash in hives may look very differently:

Because hives is usually short-term present and automatically disappears again, extensive examination is often only started when the condition is particularly troublesome and lasts more than six weeks. Then there is chronic hives.
The main tool in the search for a possible cause is the interview, showing whether one or more of the known possible causes of hives are present in the patient. Because there are many possible causes, the doctor will often use a questionnaire to be filled out by the patient at home and then examined by the doctor.
In case of very persistent hives, further examination can be conducted. This may include general blood tests, bacterial cultures and allergy testing.

If a clear cause of the hives is found, this cause must be eliminated. Antihistamines are medicines, which ensure that histamine cannot have its pro-inflammatory effect. In general, these drugs work properly and ensure that the hives is well suppressed. Sometimes it’s necessary to use these drugs for a long time, until the hives is automatically ‘extinguished’.

In most cases, there is acute hives and the skin reaction is of short duration. Chronic hives tends to ‘come and go’. There may be periods that the rash appears every day and periods that the rash disappears for a while. The severity of the rash and itch varies from case to case. Circumstances, such as heat, cold, menstrual periods, stress or emotion can make the rash flare up worse than usual. The symptoms may disappear again after a few months. In about half of the cases, the symptoms disappear within three to five years after the beginning of the condition. In about twenty percent of the cases, the condition continues for a period of more than ten years.