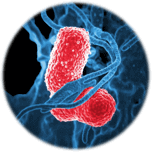 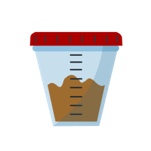 Food poisoning is getting sick after ingestion of foods that are contaminated with poisonous substances. These toxins usually come from bacteria, that secrete certain substances that are poisonous to humans and animals. These poisons or toxins remain active, even if the bacteria are dead (for example, by baking or cooking the food).

The following sources of pollution can be distinguished:

The signs and symptoms are usually diarrhea, poor appetite and nausea. Severe vomiting, abdominal pain, headache, the outbreak of cold sweat and depression may also occur. The symptoms of food poisoning often arise within eight to twenty-four hours after eating spoiled food. Fortunately, the symptoms usually disappear within a relatively short period on their own. The patient may feel weak for some days. Viruses and bacteria can cause infections in the large intestine. These infections may cause bloody diarrhea, nausea and vomiting, abdominal cramps and fever, often accompanied by headache. In some cases, food poisoning can be fatal.

The diagnosis of food poisoning is usually already clear on the basis of the symptoms. In severe cases or when a particular pathogen is suspected, it may be necessary to determine the exact cause. This can be very difficult, but examination of blood, remnants of uneaten food, stool and vomit can help.

In most cases, the symptoms can be combated without consulting a doctor. The most important thing is to ensure that the patient doesn’t dry out and takes time to recover. Avoid dehydration by drinking at least two liters of water per day. In case of loose stools, also frequently drink a large glass of water. In order to prevent dehydration in vulnerable or elderly people, sachets of ORS (Oral Rehydration Salts), dissolved in water, can be used. This product is available at pharmacies.
Antibiotics may be prescribed by the doctor, when examination shows that the food poisoning has a bacterial cause and the symptoms are severe or last longer than three to four days.

The prospects are usually excellent. Most people recover from food poisoning within two days. In case of some (certainly rare) pathogens, or if there are complications in other organs, the prognosis may be less good.