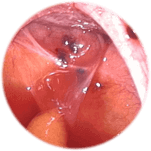 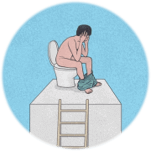 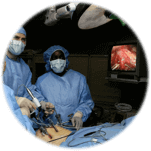 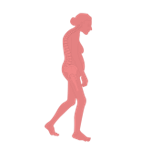 Endometriosis is a chronic disease, in which the mucosa, that covers the inside of the uterine cavity, is also found at locations outside the uterus. The exact origin of endometriosis is not yet known. The condition can cause inflammation and a lot of pain. Endometriosis can also contribute to reduced fertility.

Endometriosis is often seen in the lower part of the abdomal cavity, at the front and/or back of the uterus, against the bladder and sometimes also the colon. Endometriosis can also occur in the ovaries. The blood that is released from the endometrial spots during the menstruation, then accumulates in the ovaries. Thus causing cavities filled with blood (chocolate cysts). Endometriosis is rarely located in or on the intestine or in the bladder. The size of the endometrial spots can vary significantly.
Endometriosis can cause symptoms, but not necessarily. Symptoms can be:

Severe forms of endometriosis, with cysts and/or adhesions, can affect the fertility of women.

For pain, drugs (painkillers or hormones) are prescribed or endometrial spots are burned away during keyhole surgery. Hormones generally suppress well mild forms of endometriosis, such as small spots on the abdominal mucosa. These sometimes even disappear, due to treatment. When there are problems with getting pregnant, the guideline applies: no treatment for mild forms of endometriosis.
In case of severe symptoms, the following interventions may be required:

The course of the disease may vary from woman to woman. In some cases, it cures on its own, but it’s also possible that the patient keeps suffering and that it gradually becomes worse. Endometriosis enters a quiet phase after menopause, when a woman no longer menstruates. During pregnancy, a woman won't suffer from endometrial symptoms, because there are no menstruations.