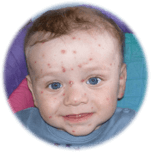 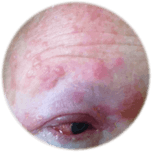 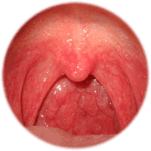 Chickenpox is caused by the Varicella zoster virus. This is the same virus that causes shingles. The virus is transferred by coughing and talking via droplets in the air. The virus can also be transferred by contact with moisture from the vesicles. After infection, it takes fourteen to twenty-one days before the outbreak of the disease occurs. Chickenpox is very contagious from one day before the spots are visible until the vesicles have dried. This takes about ten days.
Almost everyone gets chickenpox as a child, usually in winter or early spring.

The first symptoms are red spots, the size of a mosquito bite, which develop quickly into vesicles filled with clear fluid. After a few days, the vesicles dry up and scabs are formed. These scabs disappear on their own, but sometimes leave a little scar. The vesicles can occur anywhere on the skin, often in the mouth and on the eyelids too. Characteristic of chickenpox is that vesicles may also arise on the scalp.
Another common symptom is itch. A sore throat may occur and sometimes mild fever. Moreover, children are usually not really sick. Sometimes bacteria can inhabit in the remains of the vesicles, especially after scratching. This can lead to larger local inflammations and often larger scars.

The diagnosis is based on the symptoms and physical examination of the patient. Also, blood or a small amount of fluid from the vesicles can be examined.

Chickenpox passes on its own, so treatment is not necessary. The itch is sometimes so severe that treatment with a cooling liquid (lotio alba) is appropriate. This reduces the itch and allows the vesicles to dry up more quickly. When there is a bacterial infection of the vesicles, a disinfectant or antibiotic cream may be applied.
When severe symptoms and/or high fever arise, it may be that the immune system of the body is working insufficiently or a complication has occurred. It's important then to quickly consult the general practitioner. Adults, older adolescents and people with a weakened immune system can be treated with an antiviral agent.
There is a vaccine available against chickenpox. In some countries, vaccination is done on a large scale, in other countries this only applies to certain groups at risk.

People who have had chickenpox once, are normally immune to this disease for the rest of their lives. The virus that causes chickenpox, however, remains latently present in the body and may cause shingles at a later stage.
Children have a very good prognosis. Adults and children older than fourteen years who get chickenpox, are usually a lot worse off than young children.