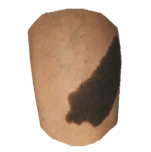 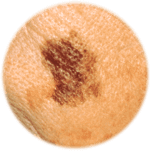 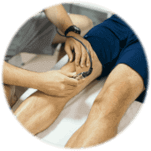 A birthmark is a congenital vascular defect, which is characterized by too strongly dilated blood vessels in the skin. They mainly occur in the skin of the neck and face, but sometimes at other places on the body as well. A birthmark looks like a pink to purple coloration. It will never disappear spontaneously.

At birth, a birthmark often looks flat and pink, on level with the normal skin. With age, the blood vessels can expand further, making the birthmark darker and thicker. Later in life, the surface can be irregular and have a purple color. A birthmark can be a few to many centimeters in size. It may consist of one spot or multiple spots. Also bumps (angiomatic papules) can sometimes develop into birthmarks. The condition doesn’t hurt.
A birthmark can be a considerable socio-emotional burden for a child, especially when the birthmark has a substantial size and is clearly visible.

The diagnosis of birthmark can be made at birth, because then the condition is often clearly to recognize. Usually, no additional examination is needed.

In the past, only camouflage could offer a solution to counter the cosmetic concerns of birthmarks. Nowadays, however, there is the possibility to treat birthmarks with laser. Laser therapy works with light of a very pure wavelength. The laser beams go through the skin, without causing significant damage. Then, the laser hits the blood vessels of the birthmark. The energy of the laser is selectively absorbed by the blood, which leads to a very brief, intense heating. This heating will damage the wall of the small blood vessels, after which they shrivel and are cleaned up by the body. The results are usually very good.

A birthmark will never disappear on its own. It is possible that in the spot red nodules are formed, filled with blood vessels. The color of the spot may also change in the course of the years. However, the condition will remain benign in all cases.